This Gluten Free Pie Crust recipe is easy! Check out these step by step instructions and learn how to make homemade pies without gluten.

If you've cut gluten out of your diet or want to accommodate gluten free guests this year keep scrolling to learn How To Make Gluten Free Pie Crust!

Thanksgiving is quickly approaching and I've found myself dreaming of pies. There is a kind of art when it comes to baking pie - Choosing the variety to make, rolling out the dough, and crimping the edges. Almost nothing makes it feel more like fall than a pie baking in the oven.

There's just one thing - I no longer eat gluten. I was freaking out a little bit a few months ago at the prospect of having to go through a holiday season without pie.

I've done some experimental gluten free baking and am realizing that it's different than the regular baking process. The blend and brand of flour produces varying results, sometimes extra steps and baking time is required, and the consistency of everything is just a little...different.

I am by no means a baking (or gluten free baking) expert but there was NO WAY I was giving up pie this holiday season. I played around, made some mistakes, and came out with a gluten free pie crust that looks (and more importantly tastes) like regular pie crust.

I thought that baking a gluten free pie crust would be just like baking a regular one.

I attempted to tweak my time-tested regular pie crust recipe by swapping out the regular flour for GF flour and expected everything to work out perfectly. WRONG! It turns out that making that simple swap resulted in a crust that literally crumbled in my fingers.

I did a little research, uttered some swear words, and gave my rolling pin a workout. A few additional steps need to be followed in order to produce a crust that looks and tastes like crust and not a pile of broken dreams.

Any brand of gluten free flour blend should work just fine when making this pie crust. The flour blend contains all of the ingredients that help it mimic a traditional All-Purpose Flour.

My favorite brands include Bob's Red Mill 1 to 1 Flour and Cup 4 Cup. You can find these brands at most grocery stores or online.

Incorporate The Butter and Flour With A Pastry Cutter

The next step differs in no way from a regular pie crust.

Cut the butter into the flour using a pastry cutter. This is a great way to get your aggression out!

Basically just jam that pastry cutter into the butter until the mixture looks like sand or coarse crumbs. This takes a few minutes but after too long that butter will be entirely incorporated into the flour.

Add Eggs To The Pie Crust

Gluten free flour has no gluten - Nothing to help it stick together. The eggs act as a binder and keep that crust in one piece!

Why Does Pie Crust Use Vinegar?

In a regular pie it's supposed to prevent the formation of gluten resulting in a more tender crust but if there's no gluten does it matter?

I don't have a good answer other than it's what I've always done and have been happy with the results.

Roll The Crust Between Two Pieces Of Plastic Wrap

A gluten free pie crust requires an extra step here: The dough must be rolled between two pieces of plastic wrap or wax paper in order to keep it in one piece and make it easier to transfer to the pie pan.

When the dough has been rolled out to the correct size remove the top layer of plastic wrap.

Lift the dough and place it on top of your pie dish. Carefully peel the second layer of plastic wrap off the dough. If you have sprinkled enough flour on the plastic wrap it shouldn't stick.

Now just press the dough into the pie dish and mend any tears with extra dough from the outer edges.

Looking for more desserts? Check out these recipes!

Baking the crust helps to firm it up, which is important because the flour contains no gluten. Gluten helps to hold pies together and skipping the parbaking process may cause the pie to become soggy.

Crimp the edges, press them down with a fork, or design them any way you like. I like to go rustic with my pies which means I just jab it with my thumb until it looks something like a normal pie and call it good (this is the rustic foodie, after all).

If you've ever made a regular pie crust with AP flour you can see that a gluten free pie crust is a bit trickier.

Just remember that pie crust does NOT have to be perfect! You don't need any fancy decorative touches - A pie crust is functional.

Pie dough is very forgiving - Simply try again if it doesn't work the first time. Add more flour to the surface if it sticks and mend tears as needed.

A Few Things To Remember About Gluten Free Pie Crust

Once you master Gluten Free Pie Crust you can make this Maple Bourbon Pecan Pie and Gluten Free Apple Pie!

Looking for more desserts? Check out these recipes! 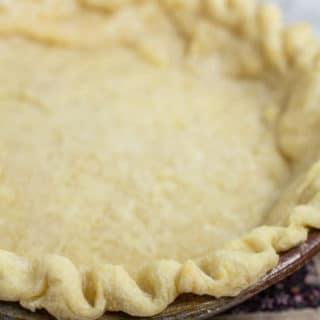