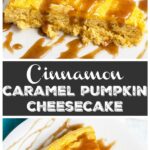 This Crustless Pumpkin Cheesecake recipe is easy and tastes like pumpkin pie! It's gluten free and topped with cinnamon caramel sauce.

This Pumpkin Cheesecake with Caramel Sauce is easy to prepare and it's light, fluffy, and gluten free but still has that decadent quality that we expect from fall desserts.

We're coming up on fall baking season and I'm pretty happy about it. Fall baking means all kinds of apple and pumpkin desserts. When it comes to desserts, my heart definitely belongs to pie.

For my money, there's almost nothing better than a scratch-made pumpkin pie and a strong cup of coffee.

Baking a pumpkin pie from scratch is a bit labor intensive, though. Sometimes it's nice to bake a dessert like this Crustless Pumpkin Cheesecake that doesn't involve rolling out pie crust and scooping out pumpkin innards.

Best of all, it tastes a lot like pumpkin pie!

How To Make Pumpkin Cheesecake

This crustless pumpkin cheesecake recipe is super easy - I promise. It's a Japanese-style cheesecake which means that it's extra light and fluffy.

There is no crust and the texture ends up kind of 'souffle-like'. It's not dense like a New York style cheesecake. I love cheesecakes of all kinds but this one is fun because it's a bit different.

It's very important that the cream cheese is room temperature or the mixture will become chunky, which results in a dense cheesecake.

How To Make Cheesecake Light and Fluffy

Next up is to make some meringue with the egg whites.

The egg whites help to keep this cheesecake light and fluffy, as opposed to a thick, creamy style of cheesecake.

Bake The Cheesecake In A Water Bath

Why Bake Cheesecake In A Water Bath?

This will keep the cheesecake moist, prevent it from drying out, and help it to cook evenly.

How To Make Caramel Sauce

Now for the really good stuff - the caramel sauce that gets drizzled on top. This caramel sauce gets spiced up a bit with some cinnamon. Caramel sauce may seem intimidating but it's super easy to make.

I love adding caramel sauce to pumpkin desserts. It adds a nice bit of richness.

Much of the sweetness in this dessert comes from the caramel so I highly advise not skipping it!

Looking for more fall desserts? Check out these recipes!

What To Serve With Crustless Cheesecake

Once the cheesecake has cooled it's time to serve! Cut a slice and drizzle with the desired amount of the cinnamon caramel sauce. The spices in the caramel sauce give this cheesecake its characteristic 'pumpkin pie' flavor.

You can also add some ice cream, crème anglaise, or homemade whipped cream to this cheesecake.

How Long Does It Last In The Fridge?

Any leftovers may be stored in an airtight container in the fridge for 3-4 days.

Be sure to allow the cheesecake to cool completely before transferring to the fridge for storage.

Can It Be Frozen?

I do not recommend freezing this pumpkin cheesecake.

I'll always gravitate toward my favorite pie recipes when it comes to fall baking but I'll make an exception once and while. This Crustless Pumpkin Cheesecake is one such exception.

Love pumpkin? Check out these recipes! 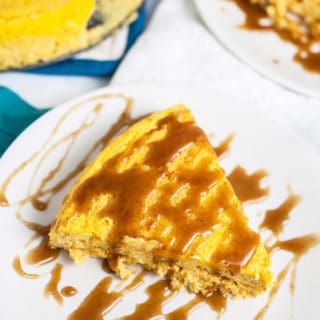 Cream cheese must be room temperature and must be whipped with a mixer or it will become clumpy.