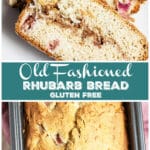 This old fashioned Gluten Free Rhubarb Bread recipe is so moist! It's made with sour cream and baked with a cinnamon streusel layer.

My recipe for Rhubarb Bread was first published on Sunday Supper Movement where I am a contributor.

This Sour Cream Rhubarb Bread may just have converted me from being on the fence about rhubarb to a rhubarb lover.

I have to be honest...I've never been particularly excited about rhubarb. It's one of those foods that's kind of polarizing - People tend to either love it or hate it.

I was always in the 'hate it' group until recently I decided to venture out of my comfort zone and add it to some bread.

This recipe just may have converted me.

You can find a rhubarb patch on the edge of every garden in Minnesota. They're ubiquitous in this state come late spring/early summer.

You never really know where the rhubarb patch came from or who originally planted it but if you garden in the state of Minnesota chances are you tend a patch of rhubarb.

This usually means that rhubarb desserts start showing up at potlucks and gatherings. In the past I would have avoided them but now? I may just give them a try!

What is rhubarb, anyway? Rhubarb is a perennial vegetable that consists of long stalks that are green and red or pink in color and and bushy dark green leaves.

The stalks are the only edible part of the plant - The leaves are poisonous as they contain oxalic acid so it is important that you do NOT eat that part!

The stalks may be used fresh or purchased frozen when out of season. Being that the cold rainy weather just doesn't want to end this year and garden are basically still dormant I went with frozen to make this rhubarb bread.

Can I Use Frozen Rhubarb?

Yes, the good thing is frozen works just as well as fresh.

Even though it's technically a vegetable rhubarb is usually treated like a fruit when it comes to cooking. You'll find it in all kinds of desserts and baked goods like muffins.

Y'all know how much I like my semi-sweet baked goodies so I thought a quick bread would be a great route to go.

This rhubarb starts with two mixing bowls - One for the wet ingredients and another for the dry.

How To Make Streusel Filling

Now for the good stuff - The streusel topping. Well, it's not actually a 'topping' as the streusel is folded into the bread as opposed to sprinkled on top the concept is the same.

Streusel is a crumbly mixture of butter, flour, sugar, and spices and basically makes anything you add it to completely addicting. I love the texture of it in this rhubarb bread!

Cinnamon and lemon zest might seem like a weird flavor combo but it WORKS - Trust me. I wouldn't skip this step.

Add The Cinnamon Streusel Layer To The Rhubarb Bread

It's time to add the streusel layer and bake the Gluten Free Rhubarb Bread - I was concerned that the struesel might burn when baking so I thought it best to add it to the middle.

How Long Does Rhubarb Bread Take To Bake?

Place the bread pan into an oven that has been heated to 350 degrees and bake for 65-70 minutes. Cooking times may vary.

You can check if the bread is done by poking the center with a toothpick. The bread is finished when the toothpick comes out clean.

Remove the pan from the oven and allow to cool before serving.

This Old Fashioned Rhubarb Bread makes a great dessert, breakfast, brunch item, or snack. I love it with some butter and, of course, a cup of coffee (I am a coffee-holic with no shame).

The sour cream or Greek yogurt makes this bread SO moist. The rhubarb has tang, the brown sugar gives it sweetness and crunch, and the cinnamon evens it out.

I used to turn my nose up at rhubarb but this may have converted me.

How Long Does It Last?

This Gluten Free Rhubarb Bread should last 3-4 days stored on the counter at room temperature or in the fridge stored in an airtight container.

It's always best to store quick breads wrapped in a towel or in a bread container to keep them moist.

To keep rhubarb bread fresh, simply place it in an airtight container and it should stay moist for a few days. You can also wrap it in plastic wrap or foil.

Can You Freeze Rhubarb Bread?

Yes! Quick breads like this one can be frozen.

Rhubarb bread can be stored in the freezer - Wrap the cooled bread tightly in plastic wrap and then place in a freezer plastic bag up to 3 months. I’d be surprised if this bread sticks around long, though—It’s pretty tasty! 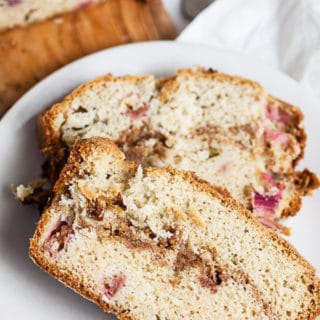 Fresh or frozen rhubarb can be used in this recipe. Simply substitute the same amount of rhubarb if using fresh.