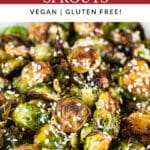 This roasted Maple Sesame Brussels Sprouts recipe is a great easy vegan side dish! It's made with a sweet, savory, and spicy Asian glaze.

Roasted Brussels sprouts are the perfect thing to serve alongside any main dish. These Asian Brussels Sprouts are super flavorful and topped with a glaze made with maple syrup, Tamari, and sesame oil.

Brussels sprouts are one of those vegetables that got little respect for much of its existence and has exploded in popularity in recent years. They are now found on the menu of any hip restaurant in some form or another.

The Brussels sprouts of our childhood were usually boiled or steamed, which results in an unappealing smell, taste, and texture. Many of us carried that version of Brussels sprouts well into adulthood.

All of that has changed and Brussels sprouts are now either roasted, grilled, sautéed, or fried. They're paired with any number of flavorful spices, sauces, and glazes.

This once unpopular vegetable has evolved into something delectable. These Maple Sesame Brussels Sprouts is one of those dishes that you find yourself going back for more...and more...and more.

Do Brussels Sprouts Need To Be Rinsed Before Cooking?

I always plant a few Brussels Sprouts plants in my garden every year. They grow tall and are kind of alien-looking.

When fall comes around I go out and pick all the 'sprouts' off the plant (and then wish I had planted a few more because I can't get enough of these things).

There are two ways in which Brussels sprouts may be purchased from a grocery store or a local farmer's market. One of them is with the sprouts attached to the stock and the other is just the sprouts, which have already been picked from the stock.

Most likely, the Brussels sprouts purchased from a supermarket will already have been removed from the stock. This means that the work of removing them has been done for you.

Here's what you'll need to make them.

How To Prep Brussels Sprouts

As far as produce goes, Brussels sprouts are super easy to prepare.

Once they've been rinsed and pat dry, all that's needed is to remove any damaged outer leaves and to cut them in half with a knife.

Brussels sprouts are in the same family as cabbage and are basically 'little cabbages'. It's good to remove any damaged or wilted outer leaves, just as you would a cabbage.

How To Make Maple Sesame Glaze

Roasted Brussels sprouts are tasty on their own, but tossing them in this Asian glaze takes them over the top!

It only takes a minute or two and a few ingredients to prepare this glaze and provides a maximum amount of flavor. Feel free to make the glaze while the sprouts are roasting in the oven.

This glaze is made with maple syrup, Tamari (or soy sauce if not gluten free), sesame oil, rice vinegar, and Sriracha. It coats the Brussels sprouts in a sticky glaze, while giving them a sweet, tangy, salty, and spicy flavor.

Tamari is a Japanese sauce made from fermented soybeans. It's similar to soy sauce in taste, but is made from soy instead of wheat, so it's gluten free.

It's a bit thicker in consistency, slightly less salty, and has an overall more robust flavor than soy sauce.

Tamari is a great alternative to soy sauce if you are gluten free and used extensively in gluten free Asian cooking.

It can be found in the Asian aisle of your local supermarket and is available in both regular and low sodium versions, just like soy sauce.

How To Keep Brussels Sprouts From Getting Soggy

Roasting is one of the best methods to use if you'd like your Brussels sprouts to become crispy, and not soggy.

Boiling or steaming them results in the overcooked, soggy, and mushy Brussels sprouts of our childhood. Luckily, those days are in the past.

There are a few tricks to use to achieve optimal crispiness and caramelization when roasting.

After 15 minutes, the Brussels sprouts are removed from the oven, tossed in the maple glaze, and then returned to the oven for another 4 minutes.

The maple sesame glaze will take away some of the 'crispiness' of the Brussels sprouts, but the flavor is so delicious that you won't even miss it.

What To Serve With Roasted Brussels Sprouts

After 20 minutes or so, the roasted Brussels sprouts are ready to serve.

I love to serve them with a squeeze of lemon to brighten up the flavor and sprinkle them with sesame seeds for texture, but these steps are entirely optional.

You can dress them up with some Sriracha for extra spice or a splash of rice vinegar for brightness.

Feel free to sub the sesame seeds for any seeds or nuts of choice. Sunflower seeds or pumpkin seeds are tasty additions, as well as toasted nuts such as almonds, walnuts, or hazelnuts.

Brussels sprouts are one of those hearty vegetables that makes for an overall great side dish. I love to pair them with grains such as rice, quinoa, or wild rice.

They're perfect served alongside roasted meats like chicken, turkey, pork or beef. I love them with this Teriyaki Turkey Rice Bowl and Asian Chicken Rice Bowls.

This recipe is vegan and delicious paired with tofu or tempeh for a meatless meal.

How Long Do Brussels Sprouts Last In The Fridge?

These roasted Brussels sprouts should last 2-3 days stored in an airtight container in the fridge.

Make sure to allow them to cool completely before transferring to the refrigerator for storage.

They may soften and lose some crispiness the longer they are stored in the fridge.

Can They Be Frozen?

I do not recommend freezing these roasted Brussels sprouts, as they are best enjoyed right away or within a few days of preparation.

Freezing would adversely affect their texture. 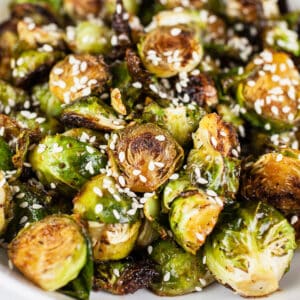 For The Brussels Sprouts:

For The Brussels Sprouts:

Feel free to use soy sauce in place of Tamari if gluten is not an issue for you. Any seeds or nuts may be used in place of sesame seeds for garnish. Nutritional information includes sesame seeds. It's best to use pure maple syrup and not artificial maple syrup to make the glaze. Feel free to double this recipe if you'd like a larger amount.